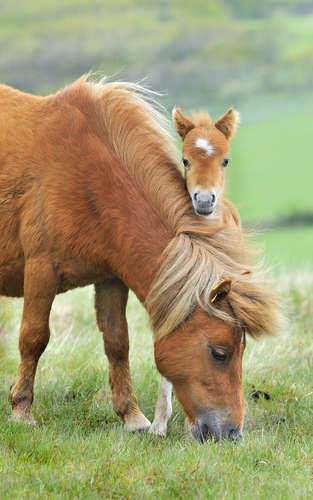 It sounds like Jurassic Park—scientists recover DNA from a long-dead animal in the hopes of understanding more about how it lived.  This week, scientists announced that they had sequenced and reconstructed the genome of a horse that died 700,000 years ago.  Their research has revealed significant new findings about the evolution of horses and donkeys, and may open the door to new research using prehistoric genomes.

Until recently, scientists who wanted to understand the evolution of animals over time had only one option for records: fossils.  While fossils extend further back in time than genome study can, they have some flaws that render them less than ideal for understanding the particulars of species evolution.

For one thing, scientists working to reconstruct the history of a species using fossils are hampered by an inevitably incomplete fossil record.  Fossils themselves are often also incomplete or damaged, and it can sometimes be difficult for researchers to determine which parts of a fossil's differences are due to species changes and which are due to individual variation.

Studying the genome of ancient organisms gives a significantly more detailed look at exactly how species have changed over time.  By comparing the 700,000 year old horse genome with more recent horse DNA, scientists revealed that the ancestor of horses and donkeys actually evolved two million years earlier than previously thought.

While genomics allows unprecedented insight into how creatures evolved in relatively recent biological history, Jurassic Park dreamers should take note: the scientists who sequenced the genome of the ancient horse believe that there is no way for enough DNA to be preserved for sequencing in any creature that died more than about 1 million years ago.  Until this most recent genomic sequencing, the earliest genome that had been analyzed belonged to a human who died about 70,000 years ago.

The horse DNA from what is now known as the Thistle Creek Horse was recovered from a bone that had been preserved by being buried beneath volcanic ash in what is now Canada's Yukon Territory.  Intensely cold permafrost conditions also contributed to the preservation of genetic material.  DNA from several other species, including a pre-domestication horse from 43,000 years ago, modern domesticated horses, and the last known wild horse population left on Earth.

According to the results of the genomic analysis, the modern wild horses analyzed have not cross-bred with domesticated horses, and represent a significantly different genetic population.  Researchers also determined that horse populations have shifted significantly with climate patterns, increasing in population during cold times and dying off during warmer periods.